High tide at the mouth of the Suwannee was at 9:27 AM.  The tide table predicted a two foot rise in the river level.  To residents upriver at Fanning Springs, both along shore and beneath the surface of the river, the influence of the moon manifests itself in a cessation of flow.  By 10:20 AM the river becomes a still lake as a lone scuba diver, flag and line in hand, walks down the north boat ramp on the Dixie County shore. 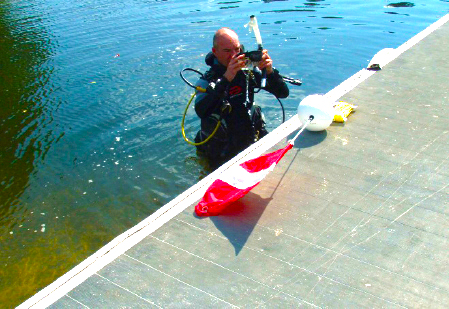 No one is there to comment on how out of place he appears.  “Where’s your boat?” The river dwelling regulars, bream and bass, scratch their gills wondering why this human is walking into the depth loaded down with everything except his boater’s gear.  The diver pauses next to the dock to put his mask and fins on and does a mental checklist to ensure he has everything: a full wetsuit, hooded vest, boots, mask, fins and snorkel, one dive knife strapped to his leg, a smaller knife attached to his buoyancy compensator, a camera in the BC’s pocket of his buoyancy compensator, a 10 watt dive light clipped on a D-ring banded to his 100 cubic foot air cylinder, first and second stage regulators (his primary) with an additional “safe-second” regulator bungeed to his neck, on his left wrist a writing slate and dive computer, on his right wrist a diver’s watch and underwater compass.  As afterthoughts he has also clipped a safety reel used in cave diving to another D-ring on his tank and placed an inflatable surface marker (a red “safety sausage”) in his utility pocket should he lose his flag and need to surface mid-river in boat traffic. (He would inflate it and remain at 10 feet deep and let the marker rise to the surface to signal boaters that someone was beneath the surface.)

As I bend forward and start my swim toward the Fanning shore I pay out line and tow the dive flag along on the undisturbed surface. Three thoughts arise: One, “Whatever you do, don’t surface by your flag, a curious boater will run you over”; two, “Why did Don have to tell me this morning that he saw a ten foot alligator across from Fanning Springs park”; and third, “Why is it that every alligator he sees is ten foot long?”  Something white catches my attention lying in the sand at 16 feet. 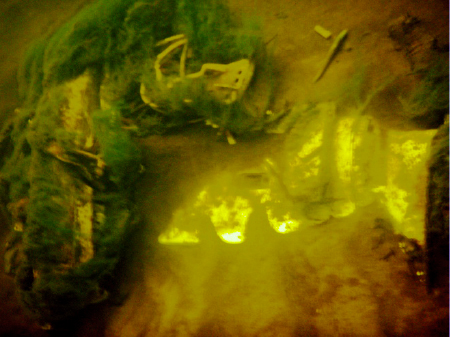 Someone didn’t have a good fishing day. A small white outboard motor lies partially buried. I take a couple photos, note its location on my wrist slate and swim on.  A series of clicking sounds grow louder as I scan the extreme edges of visibility. While I can see fine at 31 feet anything beyond 10 to 15 feet disappears in the uniform tannin color of the river.  “Do alligators click their teeth before taking a test bite?”  Slowly two then three shapes move along both sides of me.  I dig out my camera as three sturgeons ranging from two to four feet long (“no Don, none were 10 feet long”) and merge into the monochrome murk ahead of us before I can take a picture.

I’ve been watching sturgeon jumping high out of the water for years.  I noticed that they tend to jump in the same general area.  So I figure they must act like the bowfin or mudfish staking claims on a cool spring seep in the river bottom. These fish certainly didn’t appear in a hurry to go anywhere.  I turned on the camera and swam slowly to see if they would return. 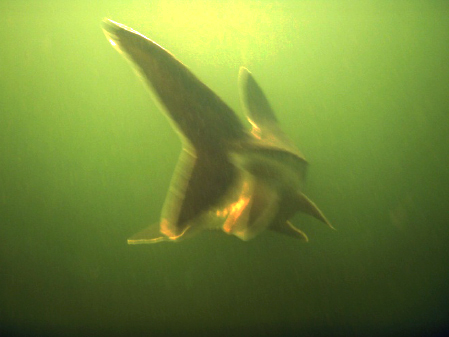 Within a minute I swam into the tail of a larger one, probably five feet or longer. I had to stop and make a compromise between getting a clear picture of a tail or a dimmer picture at some distance of a full sturgeon.   I took both shots. 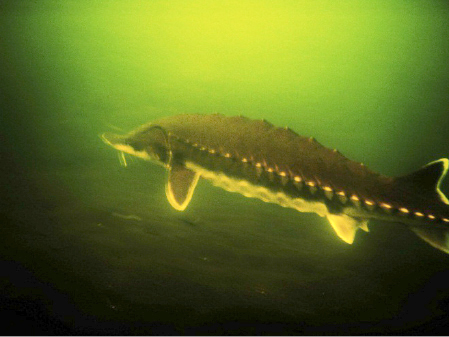 Over the next five to ten minutes, as I swam slowly in the still waters alternating between checking my compass and taking photos, half a dozen sturgeon and one diver slowly got acquainted. I can’t be sure the clicks came from the sturgeon. But when they left, the sounds ended... for a while. 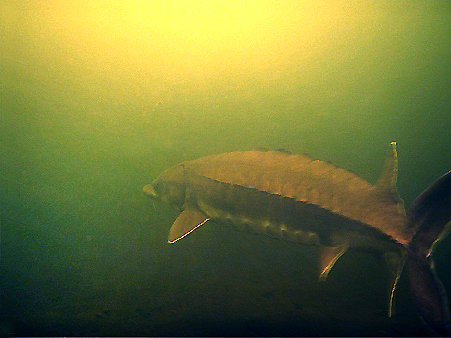 I was now across the river and in 31 feet of water.  This is the area that houseboats from the lower Suwannee stop and anchor for the night.  I’ve often wondered how they avoid getting their anchors stuck in the karst boulders and formations on the bottom. Apparently they don’t avoid it.  Under a five foot jagged boulder (“Yes, Don, most of what I see is 5 feet long or wide or both”) I see an object with raised lettering. 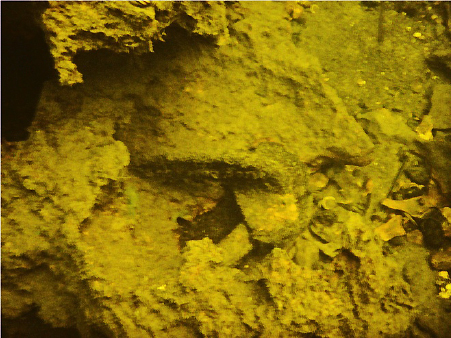 Someone has lost an expensive anchor.  Scratching my regulator/gills I muse that husband and wife are yelling. “Swing it around I think we’re tangled on something!

“Maybe it’s one of those 10 foot alligators that the guy on his dock told us about.”

“Won’t we have to pay for the anchor?”

“Don’t worry about it, I’ll borrow someone’s scuba gear and come get it next week.”

I imagine the wife speaking nicely under her breath as she tries to figure out what a five foot anchor costs. (Everything looks five foot long in the Suwannee.) “Mental note to self... call Miller’s and ask if they’d like to buy some used anchors from me.”

I make a note on my slate where the anchor is located and swim over to the shore to get my surface bearings.  I’ve arrived within five foot of my objective, REALLY!

For the next hour I swim around the bottom using my compass and streams of moss or sand wavelets to navigate up and down river. A cool clearer water zone with a long white sandy slide to deeper water tells me I’m passing the spring run.  I hear the now familiar clicks but they are faint.  Maybe the 10 foot sturgeons are more bashful.

Three more times I encounter lost anchors. One cut line runs to a circular hole in the karst and I pull out a mushroom anchor. 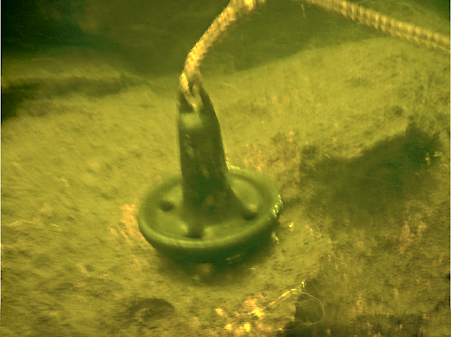 Another line leads me to a large “V” shaped pile of trees with a galvanized fluke style anchor wedged under a log and buried in debris. 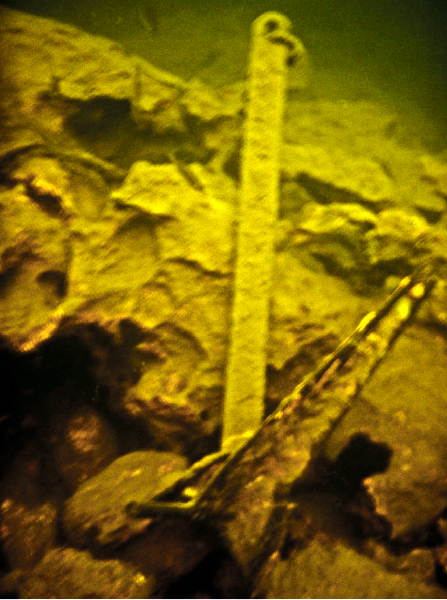 The last anchor had to have been owned by a luckless fisherman disgusted with the loss of one or more expensive anchors.  He probably is the guy who threw his spinning reel (without a rod) in the river and gave up fishing.  He had wrapped his line around a tall rock (five feet tall as a matter of fact) as he tried to maneuver his boat for a better extraction point. On the end of the line was a cement filled bucket (absent anyone’s boots). 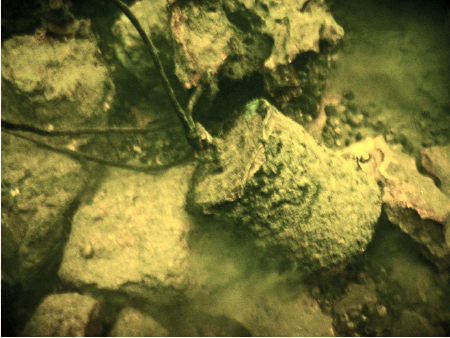 By this time I had been diving for an hour and was just getting into the area by Little Fanning spring run.  My air had dropped from 3,500 to just below 2,000 psi.  I still had a mile to swim. The river, outboard motor, anchors and sturgeon had conspired to make that swim a tougher one than I expected. There still was no current.  I took a quick compass bearing on floating docks south of the old restaurant and canal then dropped down... right on top of a sunken boat.  (“No, Don, the boat wasn’t 10 feet across the beam, nor was it filled with 10 yards of concrete.”)   But it certainly was a wreck. 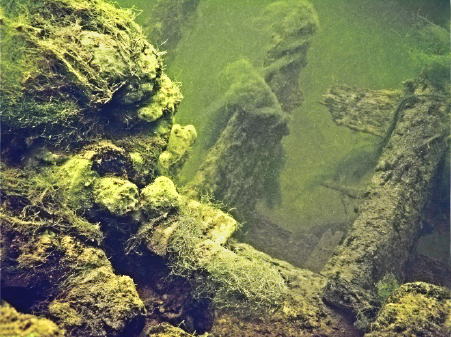 This boat had an inboard motor. I guess it might have burned to the water line and sunk.  I’ve heard about such a boat on the north side of the bridge. Maybe the floods carried it down here a few years ago.

As with the anchors I made some notes, took some photos and then started a long one-hour, one mile swim south.  I thought I heard some chuckling from some luckless boater far above me as I did an equipment check and found that the spinning reel I had placed in a mesh bag had disappeared from my person.  Feeling down the inside of my left leg I found that my big fancy dive knife had fallen out of its fancy sheath somewhere in the last one-hour and half mile of meandering around the bottom.  I make a silent apology to the luckless fisherman and vow to search for my knife hoping to find it in the concrete bucket anchor in a later dive. 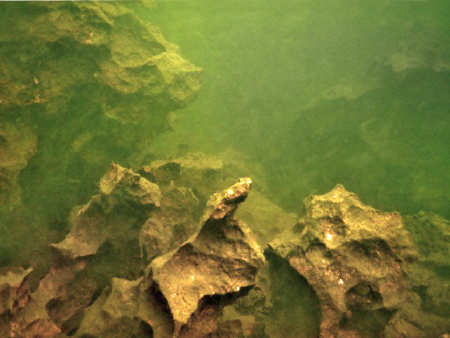 The swim south was uneventful as I navigated with the compass, and moved perpendicular to the sand ridges noting that the light debris was on the downstream side of the ridges.  The river has large swaths of solid smooth rock bottom.  Anchor drag marks show in some spots.  Along the Dixie shore karst boulders and occasional gullies three feet deep (“nope, none were five feet deep) ran perpendicular to the current.  The bottom of the trenches is bare smooth rock.  I’ll have to spend some more time with a kayak, flag and small scuba tank to check out where sturgeon jump in these areas to see if any spring seeps are exposed.

My legs keep kicking, my air gage keeps falling and both run out as I surface next to my blue hulled pontoon boat.  Three hundred psi is forgivable but I should have left earlier so I ended with 500 psi.

My wife had kindly lowered the ladder on the boat. I climb out tired and a little lighter as I surrender my favorite fancy dive knife to my sturgeon companions.  All in all the payment to them was worth it and I now have photos and memories of my adventure.

Now, how do I go back and get that motor and anchors before this story hits the press?

Footnote:  If I recover the motor I’ll try to find the serial number of it and give it to the newspaper. If anyone calls with the correct number they can have it back.  Otherwise it will join my collection of treasure from Davy Sturgeon’s locker. (If you all would put a tag on your anchor line with a name and phone number I’d also be glad to return your anchors!)