The Big Bend Saltwater Paddling Trail and Suwannee River Wilderness Trail converge at Suwannee, making the tiny community an obvious stopping point for paddlers on the two long-distance trails. When they arrive, weary and ready for a shower and a proper meal, local paddling enthusiasts Leroy Harmon and Debbie Meeks mobilize to offer whatever help is needed. Volunteers like Harmon and Meeks are known as Trail Angels. They are usually found in waterfront towns like Suwannee and they go out of their way to assist paddlers.

Recently, an unusual paddler, Aaron Carotta, came to town. Liz Sparks, FWC recreation planner and paddling trail advocate alerted the Trail Angel network to be on the watch for Aaron, aka “Adventure Aaron,” and Austin Graham, a cinematographer who joined him for the last leg, after she ran into them at Keaton Beach by chance and learned they were trying to get to the Atlantic coast as fast as possible.

"Their detour up the Suwannee was partly my fault,” Meeks says with a laugh. She had given them a Suwannee Wilderness Trail guide and described the wonderful river camps, manatees and springs they would see on the way. She shrugs. "Leroy and I cautioned them that the Suwannee is high right now and we’d never heard of anyone paddling all the way upstream, especially with water running 3-4 mph."

Harmon, octogenarian and senior trail angel in Suwannee, as usual went the extra mile or hundred for Aaron and Austin. After they left Suwannee, he drove to meet them along the way for the next three days, buying meals, transporting Austin to Chiefland for an emergency data cable replacement and dispensing local knowledge—just another day in the life of a Trail Angel.

Once Aaron surpassed the Guinness record, exhausted from paddling upstream against the Suwannee, he asked to be portaged from just below Branford to the St. Mary’s river. Aaron and Austin reached the Atlantic on Aaron’s 233th expedition day.

P.S. Leroy was named Trail Angel of the Year by the Florida Paddling Trail Association. Jill Lingard presented the award to him on April 22, 2017. 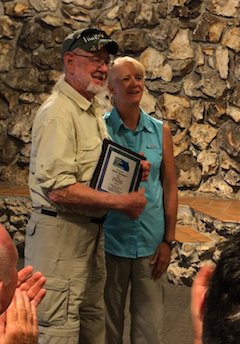